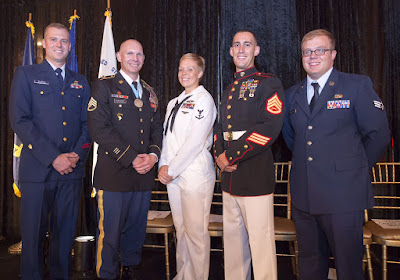 DETROIT – Five men and women representing each branch of the U.S. military were honored Tuesday night for their exemplary service during the 2015 Military Times Service Member of the Year Awards.

The 15th annual event was held in Washington, D.C., with members of Congress and senior Pentagon officials in attendance. General Motors has been a corporate sponsor of the event for more than 10 years.

Since 2000, Military Times has singled out five "Everyday Heroes" – service members who demonstrate pride, dedication and courage beyond what is expected. All five branches of the military – Army, Navy, Marines, Air Force and Coast Guard – are represented.

In addition to the awards gala, winners are recognized online, in the Military Times newspapers and at special events in and around Washington.

About GM’s Military Support: For more than 100 years, GM has proudly provided ongoing support to members of the U.S. military and their families. Through the support of key hiring and training initiatives – including Hiring Our Heroes, Shifting Gears and more – GM remains a committed partner as many veterans return to the civilian workforce. To learn more, visit GMMilitaryDiscount.com.
Posted by Lehmers Work Trucks at 8:30 AM