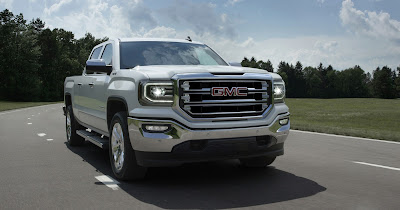 DETROIT – The GMC Sierra 1500 today was named the 2016 Texas Truck Showdown Towing Champion, in a head-to-head capability test conducted by editors from Cars.com, PickupTrucks.com and MrTruck.com.

They praised their Sierra 1500 SLT test truck, which was equipped with the available 6.2L V-8 engine – the segment’s most powerful gas engine – and eight-speed automatic transmission, for its effortless performance. It offered a max trailering rating of 12,000 lbs.

“This is a mild-mannered pickup that is ready to don its cape and do some heavy lifting, saving the day from a long list of work chores,” said Mark Williams, PickupTrucks.com editor. “The engine and transmission are synced up like a smooth-flying jet rocket.”

And while it had the largest, most powerful engine in the test – 420 hp and 460 lb-ft – the Sierra also ranked first in fuel economy with a trailer. The other competitors included:

“This recognition validates everything GMC stands for: powerful truck capability uniquely coupled with premium appointments and refinement,” said Sierra Marketing Manager Stuart Pierce. “Combined with bold new styling for 2016 and its crafted interior, the Sierra handles the toughest tasks in the utmost comfort.”

A five-part series outlining the evaluation begins today at www.pickuptrucks.com. As one of their most extensive comparison tests, which was conducted over a weeklong period in the Houston area, it included 20 objective tests, as well as six additional categories.

Technology was one of the categories and the Sierra scored high for its new Apple CarPlay and Android Auto capability.

“Apple CarPlay simplifies using an iPhone in the truck easier than any other multimedia system,” said Joe Bruzek, Cars.com.

The 2016 Best Light-Duty Truck for Towing award is the third recent accolade for GMC from PickupTrucks.com. The Canyon took the crown in their 2015 Midsize Truck Shootout and the 2015 Sierra 3500HD claimed the top spot in the Ultimate Heavy Duty Challenge.

Posted by Lehmers Work Trucks at 9:00 AM