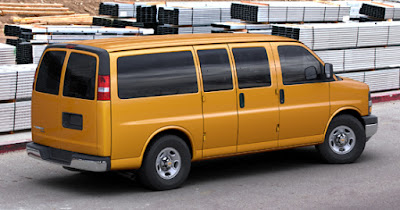 GM, maker of the oldest commercial vans on the market, will put the new, torque-biased four-cylinder Duramax diesel engine into both the E-Series Chevrolet Express and GMC Savana for the 2017 model year.

According to Automotive News, the lightly modified global diesel engine currently used in the Chevy Colorado and GMC Canyon midsize pickup trucks will be offered as an option in the long- and short-wheelbase 2500 and 3500 2017 full-size GM vans.

Some might argue this was not a difficult decision for GM because the midsize pickups and large work vans are built at the same Missouri plant near St. Louis. Ordering more diesel engines for the same location should be simple, assuming that demand for the diesel engines doesn't outpace production capabilities given that it offers as much as 31 mpg highway when optioned in the midsize pickup. The diesel is likely to be paired with GM's new eight-speed transmission used in Chevy and GMC half-ton V-8 pickups.

The Express and Savana are the oldest commercial vans sold in the U.S. They haven't been significantly redesigned in almost 20 years, yet they sell in strong numbers: more than 100,000 in 2014 and 85,000 in 2015. Despite the proliferation of new, Euro-styled vans such as the full-size Ram ProMaster and Ford Transit, and smaller Ford Transit Connect, Nissan NV200 and Mercedes-Benz Metro, GM is finding unique ways to keep its old-school vans alive and generate customer interest.

GM's high-tech 2.8-liter turbo-diesel uses a cast-iron block and aluminum cylinder heads along with a dual overhead cam 16-valve setup that produces 181 horsepower at 3,400 rpm and 369 pounds-feet of torque at 2,000 rpms in the midsize pickups. It's possible, for the sake of greater longevity, that GM could decide to "de-rate" the engine since it will be put into a vehicle with a heavier curb weight, higher gross vehicle weight rating, and more payload and towing capacity.

Given the EPA fuel-economy numbers for the midsize pickup with the small diesel — 22/31/25 mpg city/highway/combined — and that GM's most-popular engine for full-size vans is the 6.0-liter V-8 (11/16/13 mpg), it's possible that ownership cost savings based on fuel consumption alone could mean the higher price of the little Duramax could be one of those rare instances where the vehicle could pay for the engine upgrade in the first year of operation.

Model-year 2017 vans will be available for ordering through select dealerships later this fall.


Posted by Lehmers Work Trucks at 8:30 AM