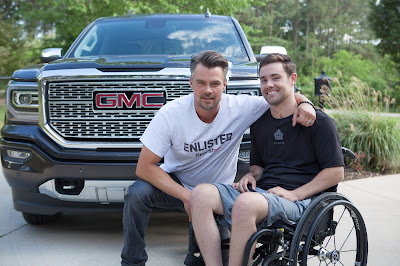 DETROIT - In honor of Military Appreciation Month, and as part of the ongoing relationship between GMC and veteran support program Building for America’s Bravest, the brand is calling on its staff, fans and fellow Americans to support the foundation’s work to build life-changing smart homes for severely injured service members. GMC has committed to contribute up to $2 million by the end of 2016 and is asking people across the country to “enlist to unlist” the more than 200 severely injured service men and women currently waiting for smart homes.

As part of the campaign, a continuation of the #enlistme activity started in 2015, GMC has enlisted the support of actor Josh Duhamel as campaign ambassador, in an effort to increase awareness and raise funds to make significant differences in the lives of these courageous service members.

Speaking on why he chose to support, Duhamel referenced his strong ties to both the military and the GMC brand. “I grew up near a military base in North Dakota. My aunt was in the military and completed a number of tours overseas and my grandfather was a proud veteran. I feel it’s my duty as an American, and as a supporter of our veterans, to do as much as I can to bring awareness to the work of Building for America’s Bravest. I have owned a GMC truck since 2004, so when GMC asked me to step up and work with them, it was a no-brainer. I hope you will join me in enlisting to support this incredible cause.”

GMC and its parent company have supported the U.S. military for more than 100 years, working with the mantra of “Helping, Hiring & Driving,” through a mixture of employment programs, veteran support programs and offering the best possible automotive military discount during Military Appreciation Month, which is offered to all 21 million veterans and their families through May 31, 2016.

Speaking on the importance of the #enlistme campaign, U.S. Vice President GMC, Duncan Aldred added, “GMC supports the military all year round, but we are especially excited to work with Josh Duhamel during Military Appreciation Month to raise awareness for Building for America’s Bravest. The GMC brand is about precision and attention to detail across our vehicles, and as such, it makes sense for us to support the building of precise smart homes to give these heroes a sense of independence and comfort.”

The #enlistme campaign features two pieces of unique content, hosted by Duhamel, that introduce viewers to some of the veterans who have benefitted from the work of the program:

GMC #enlistme 360 Skydive - The first film sees two severely injured veterans, Marine Cpl. Todd Love and Army Staff Sgt. Stephen Valyou, complete a skydive to celebrate the feeling of independence that smart homes give to veterans. The unique 360-degree video will be available to view and post beginning May 21.

Discussing his passion for skydiving, Love, a triple amputee, said, “When I’m in the sky flying with my friends we’re all equals. Gravity treats us all the same.”

GMC Presents #enlistme with Josh Duhamel - In a documentary-style film, Duhamel meets Marine Sgt. Ben Tomlinson at his smart home in Jacksonville, Alabama to speak with Tomlinson and his family about their journey and the positive impact this home has had on his life. The mini documentary will be available to view and post beginning May 26.

Describing his experience with Building for America’s Bravest, which is a program of the Stephen Siller Tunnel to Towers Foundation, Tomlinson said, “Living in this house has made my outlook on life more positive, and I know the impact on my family has been as big, if not bigger, than it has been for me. I am told all the time that I’m a hero, but to me, the people from Building for America’s Bravest are the real heroes because they’re helping to improve people’s lives. I’m grateful to GMC for supporting their work.”

Speaking on the longstanding relationship with GMC, Stephen Siller Tunnel to Towers Foundation CEO Frank Siller stated, “GMC’s support of the military is second to none. We’re incredibly thankful for our partnership with them.” Siller continued, “The respect and appreciation that Josh Duhamel has for our veterans truly serves as an example for us all. We’re grateful for his selfless effort to help raise funds and awareness for our Foundation. With the help of Josh and GMC, we’ll be able to build more smart homes for catastrophically injured service members through our Building for America’s Bravest program.”