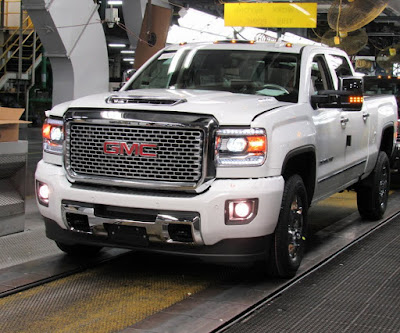 Since then, Duramax engines have won multiple awards and built a reputation for impressive power and durability.

DMAX, Ltd. has grown its employment in the past few years and currently employs 554 I.U.E.-CWA Local 755 hourly and 114 salaried employees for a total of 668.

Employees are currently building the redesigned Duramax 6.6L V-8 turbo-diesel. This next-generation engine offers more horsepower and torque than ever — an SAE-certified 445 horsepower (332 kW) at 2,800 rpm and 910 lb-ft of torque (1,234 Nm) at 1,600 rpm — to enable easier, more confident hauling and trailering.

Along with a 19 percent increase in max torque over the last Duramax 6.6L, the redesigned turbo-diesel’s performance is quieter and smoother, for greater refinement. It is also capable of running on B20 biodiesel, a fuel composed of 20 percent biodiesel and 80 percent conventional diesel. B20 helps lower carbon dioxide emissions and lessen dependence on petroleum. It is a domestically produced, renewable fuel made primarily of plant matter, mostly soybean oil.

DMAX, Ltd. was established in 1998. GM owns 60 percent and Isuzu owns 40 percent of the joint venture.

Quote from GMNA Manufacturing and Labor Relations Vice President Cathy Clegg
“The Duramax Diesel has powered GM’s heavy-duty pickups to numerous quality, reliability, durability and truck of the year awards. These awards would not be possible without the hard work of the men and women of the IUE and DMAX.”

“Over the past 17 years, DMAX has produced 2 million award-winning heavy-duty diesel engines. This is not only a significant milestone, but truly speaks to the dedication of our team.

“We consider ourselves to be a big part of the community in which we live and work. We have invested both dollars and volunteerism into several local organizations, specifically the Moraine Foundation, which channels all local charitable activities and the promotion of STEM-related opportunities through the West Carrollton HS–FIRST Robotics Club.”

“This is a testament to the dedication of our workforce to continue to produce a great product. We have a culture here at DMAX that is based off of teamwork and a family environment. Everyone is dedicated to the vision of our company. I'm so proud of our members and their continued drive to be successful!”

General Motors Co. (NYSE:GM, TSX: GMM) and its partners produce vehicles in 30 countries, and the company has leadership positions in the world's largest and fastest-growing automotive markets.  GM, its subsidiaries and joint venture entities sell vehicles under the Chevrolet, Cadillac, Baojun, Buick, GMC, Holden, Jiefang, Opel, Vauxhall and Wuling brands. More information on the company and its subsidiaries, including OnStar, a global leader in vehicle safety, security and information services, can be found at http://www.gm.com.

Founded in 1916, Isuzu Motors has the longest history of any Japanese vehicle manufacturer. During our years of operation, we have consistently focused on "creation without compromise" in the process of building Isuzu into the company it is today. And now we are boldly taking up the challenge of global leadership in commercial vehicles and diesel engines while maintaining our traditions.