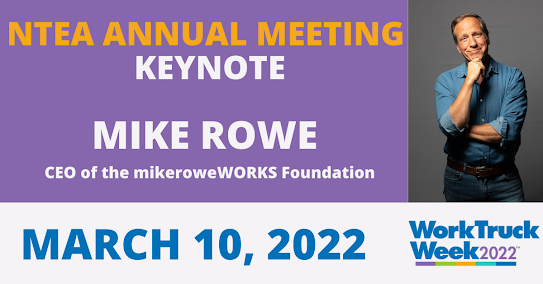 One of Work Truck Week’s most popular keynote speakers returns to the NTEA stage with fresh insights on the value of hard work. Best known as the “dirtiest man on TV,” a title he earned as the creator and host of the hit TV series Dirty Jobs, Mike Rowe is also the country’s leading advocate for the skilled trades. Join Mike as he shares lessons learned while working as an apprentice and talks about opportunities that exist in the most unlikely professions.

Mike is the founder and CEO of the mikeroweWORKS Foundation, a 501(c)(3) public charity that debunks myths and misperceptions about the trades and helps close the skills gap in today’s workforce. He is currently the executive producer and host of discovery+ series Six Degrees and Somebody’s Got to Do It on TBN and Pure Flix, and he won an Emmy for his work on Facebook’s groundbreaking series Returning the Favor.