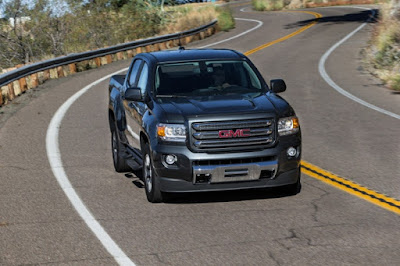 It’s no surprise 2016 Chevrolet Colorados/GMC Canyons aren’t any different mechanically or visually  from the 2015s that marked GM’s return back to the midsize truck market.

The biggest news: a sliding rear window will be standard on the loaded 2016 GMC Canyon SLT models and optional in the SLE trim level.
Advertisement

The only other news is the 2.8L Duramax diesel will be offered some time in 2016. Actual production dates have yet to be announced.


Road Test: 2015 Chevrolet Colorado A midsize pickup for those who want a smaller pickup to help cut down on operating costs while still keeping comfort, ...

The latter also has the highest towing capacity in the class at 7,000 pounds when “properly equipped.”

First quarter sales of the 2015 Colorado/Canyon have exceeded GM’s lofty expectations, outselling the competitors and having the least amount of time sitting on dealer lots, even beating out Ford’s F-150 in that category.

What is surprising is GM says 53-percent of the Colorado buyers are first-time Bowtie owners.