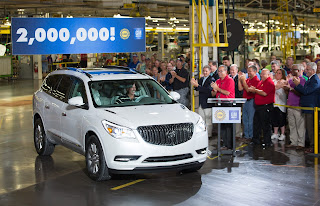 LANSING, Mich. – A 2016 Buick Enclave, painted in White Frost Tricoat, rolled off the production line at General Motors’ Lansing Delta Township Assembly Plant today, the 2 millionth vehicle produced at the automaker’s newest assembly plant in North America.
"This milestone directly reflects the dedication and hard work that our employees put into these crossovers every day,” said Mike Trevorrow, Lansing regional plant manager. “This team has established a strong foundation since opening to enable us to produce our 2 millionth vehicle in nine years, which is quite an accomplishment.”
Opened in 2006, Lansing Delta Township Assembly blends best practices and the newest technology in one facility. It was the first automotive manufacturing facility in the world to be a Gold Certified Leader in Energy and Environmental Design (LEED).
Since starting production, Lansing Delta Township has manufactured the Saturn Outlook, Chevrolet Traverse, GMC Acadia, Acadia Denali and Buick Enclave. A white Outlook was the first vehicle produced on May 24, 2006.
The plant currently employs approximately 3,200 employees on three shifts.
GM has announced more than $580 million in investments for Lansing Delta Township facility over the last two years, including $63 million in 2014 to expand the plant by nearly 263,000 square feet and $520 million earlier this year for tooling and equipment associated with future new vehicle programs.
“Producing the 2 millionth vehicle would not be possible without the great people we have here,” said UAW Local 602 President Bill Reed.
While most vehicles follow somewhat of a bell curve for sales during their lifecycle, the Enclave has continued an upward trajectory after more than seven years. Minor dips in 2009 and 2012 reflected overall trends in the recovering auto industry, but record-setting 2014 sales represented a 39-percent increase over the Enclave’s first full year of production. As of June 2015, more than 500,000 Enclave models had been sold worldwide.
“The Enclave led Buick’s product renaissance, redefining what consumers should expect from a full-size luxury crossover,” said Duncan Aldred, vice president of Buick. “It is fitting that an Enclave is the 2 millionth vehicle to roll off the line in Lansing, demonstrating continued consumer demand.”
This milestone for Lansing Delta Township is part of GM’s celebration of 500 million vehicles built globally, more than any other automaker.
About General Motors Co,
General Motors Co. (NYSE:GM, TSX: GMM) and its partners produce vehicles in 30 countries, and the company has leadership positions in the world's largest and fastest-growing automotive markets.  GM’s brands include Chevrolet and Cadillac, as well as Baojun, Buick, GMC, Holden, Isuzu, Jiefang, Opel, Vauxhall and Wuling. More information on the company and its subsidiaries, including OnStar, a global leader in vehicle safety, security and information services, can be found at http://www.gm.com.

About Buick
Buick is an international modern luxury brand offering vehicles with sculpted designs, luxurious interiors and thoughtful personal technologies, along with responsive-yet-efficient performance. Buick is attracting new customers with its portfolio of award-winning luxury models in North America and China. Learn more about Buick cars and crossovers at www.buick.com, on Twitter @buick, on Instragram, or at www.facebook.com/buick
Posted by Lehmers Work Trucks at 8:30 AM