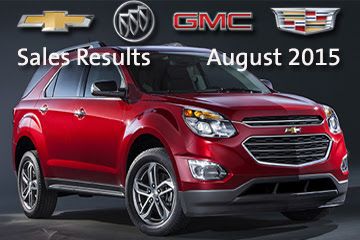 DETROIT – General Motors’ (NYSE: GM) Chevrolet, Buick, GMC and Cadillac brands sold 270,480 vehicles in the United States in August 2015. Retail deliveries climbed 6 percent compared with a year ago, when results included the Labor Day holiday. GM had the industry’s largest retail sales increase and gained more than 1 percentage point of retail market share year over year, based on J.D. Power PIN estimates. Fleet sales were down 24 percent on a 38 percent decline in rental deliveries. Total sales were in line with a year ago.

GM continues to have the highest average transaction prices (ATPs) and had the lowest incentives as a percentage of ATP in the domestic industry, according to PIN.

“GM’s retail sales increase far outpaced the industry in August, and we have grown our retail share for five months in a row compared to last year,” said Kurt McNeil, GM’s U.S. vice president of Sales Operations. “We will continue this momentum with the redesigned Chevrolet Cruze and Malibu, the launch of diesel engines for our midsize pickups, a dramatic restyling of the Chevrolet Silverado and the aggressive rollout of Apple CarPlay and Android Auto.”

GM’s outperformance came in a very strong month for the industry. The estimated seasonally adjusted annual selling rate (SAAR) for light vehicles was 17.5 million units in August, the fourth month in a row above 17 million units – a streak unmatched since 2006.

“All of the economic fundamentals that we look at, including job growth, disposable income and fuel prices, are in good shape and that should keep sales strong,” McNeil said.

August Sales Highlights vs. 2014 (except as noted)
Total Sales

GMC
•    GMC had its best August sales since 2005.
•    GMC pickup deliveries were up 21 percent, with the Sierra up 7 percent and Canyon deliveries totaling 2,423 units.
•    The Sierra and Canyon have the highest ATPs in their respective segments, according to PIN. The Sierra has the highest ATPs of any pickup line in the industry.
•    The Acadia had its best August ever, with sales up 10 percent.

Cadillac
•    The SRX crossover was up 52 percent.

Fleet and Commercial
•    GM continues to execute its plan to reduce sales to rental customers. Rental deliveries in August were down approximately 15,000 units, or 38 percent, and they are expected to be down again in September.
•    Commercial deliveries were up 2 percent year over year, the 22nd consecutive monthly sales increase.
•    Government sales were up 6 percent, with deliveries to state and local government agencies up 10 percent.
•    Calendar year to date, commercial deliveries are up 16 percent, government sales are up 5 percent and rental deliveries are down 14 percent. Total fleet deliveries are down 5 percent.
•    Pickup sales to fleets have increased year over year for 16 straight months due to strong demand from commercial and government agency customers.
Retail Sales

GMC
•    GMC has grown its retail sales for 19 consecutive months, and the brand delivered its best August retail sales since 2003.
•    The Terrain was up 10 percent and the Acadia was up 3 percent.
•    The Sierra was up 6 percent.

Buick
•    Encore deliveries were up 29 percent and Enclave was up 19 percent.

Posted by Lehmers Work Trucks at 9:30 AM