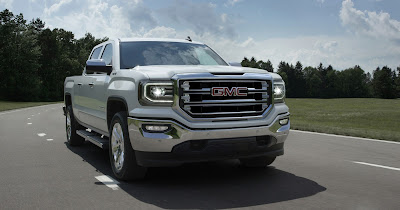 DETROIT – With exterior design the top draw for customers to the Sierra 1500, GMC’s best-selling truck rolls into 2016 with a fresh appearance that takes its signature premium styling to a higher level – and offers new, advanced engineering features designed to complement its crafted interior.

Advanced engineering in the 2016 Sierra is manifested in next-generation technologies such as Lane Keep Assist, which helps keep the truck in its lane with subtle steering enhancements, and IntelliBeam headlamp control, which automatically adjusts the high beams for oncoming traffic. Both are added to the Driver Alert Package available on SLT and Sierra Denali models.

The 2016 Sierra’s new technologies also include phone integration via GMC IntelliLink, which enhances connectivity and promotes safer driving. It allows smartphone users to connect with applications such as navigation, hands-free messaging and more through Apple CarPlay or Android Auto. Android Auto is standard on a new radio with a seven-inch-diagonal screen at the start of production and is coming to available eight-inch radios later in the model year.

What hasn’t changed with the Sierra is its high level of capability. The available NHT max trailering package, for example, features a 9.76-inch rear axle, heavy-duty rear springs, unique shock tuning, enhanced cooling and an integrated trailer brake controller. It enables a maximum payload rating of 2,260 pounds (1,025 kg) and a maximum trailering rating of 12,000 pounds (5,443 kg).

Sierra 1500 lineup
The 2016 Sierra 1500 range includes regular cab and two four-door cabs – the double cab and crew cab – body styles, all offered with 4WD. Models and trim levels include the base model, SLE, SLT and Denali – with regular cab offered only in standard and SLE trims and Denali offered exclusively as a crew cab. Elevation Edition and All Terrain packages are available.

Sierra Denali is the only full-size truck to offer Magnetic Ride Control real-time damping; and with the available 6.2L V-8, eight-speed automatic transmission and new connectivity features, it retains its position as the most refined, technically advanced truck on the market.

GMC has manufactured trucks since 1902, with innovation and engineering excellence built into all GMC vehicles. The brand is evolving to offer more fuel-efficient trucks and crossovers, including the Terrain small SUV and Acadia crossover. GMC’s highest-volume vehicle, the Sierra pickup, is the most powerful light-duty pickup on the market, and the first full-size pickup to receive the highest-possible five-star Overall Vehicle Score for safety since the National Highway Traffic Safety Administration changed its New Car Assessment Program for the 2011 model year. Details on all GMC models are available at http://www.gmc.com/, on Twitter at @thisisgmc or at http://www.facebook.com/gmc.
Posted by Lehmers Work Trucks at 7:00 AM