Generous discounts expanded
to include more than 23 million veterans 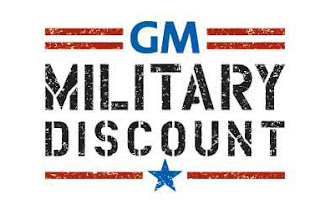 “As current and former members of our armed forces celebrate Veterans Day and the holidays with their families, we want to show our appreciation for their service,” said Steve Hill, GM vice president of U.S. sales and service. “Working with key partners like Building for America’s Bravest, Hiring Our Heroes, and the Achilles Freedom Team, we hope to do even more to continue GM’s 100-year legacy of commitment to the brave men and women of the U.S. military.”

First offered in 2008, the GM Military Discount features pricing below the suggested retail price for eligible vehicles. Typically, the program is available only to active-duty, reserves, retirees and veterans and spouses within a year of discharge. The expanded program extends the discount regardless of separation date.

The GM Military Discount is one way GM continues to support the U.S. military. Forged when its factories were transformed into the Arsenal of Democracy during World War II, GM’s commitment to hiring and helping veterans is stronger than ever.

•    In 2015, GM was recognized by G.I. Jobs, Military Spouse, Military Times and the State of Michigan for strong support of its more than 5,000 employees who are veterans
•    As a national supporter of Hiring Our Heroes, GM has helped organize more than 900 job fairs where partner companies have hired more than 500,000 veterans since 2012.
•    Through ongoing support of the Achilles Freedom Team and Building for America’s Bravest, GM helps the most seriously wounded veterans recover.

General Motors Co. (NYSE:GM, TSX: GMM) and its partners produce vehicles in 30 countries, and the company has leadership positions in the world's largest and fastest-growing automotive markets. GM, its subsidiaries and joint venture entities sell vehicles under the Chevrolet, Cadillac, Baojun, Buick, GMC, Holden, Jiefang, Opel, Vauxhall and Wuling brands. More information on the company and its subsidiaries, including OnStar, a global leader in vehicle safety, security and information services, can be found at http://www.gm.com
Posted by Lehmers Work Trucks at 8:00 AM