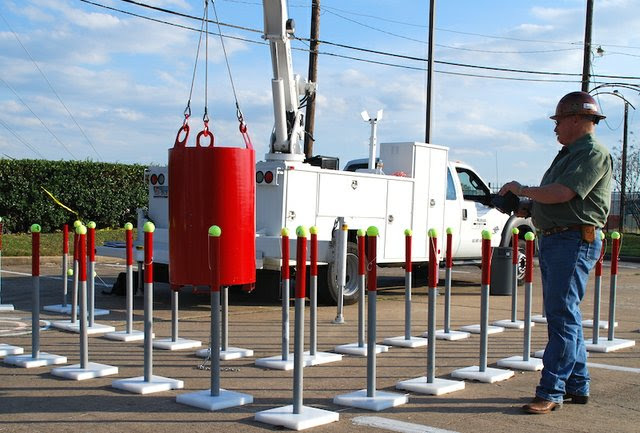 A candidate maneuvers the test load through the NCCCO’s service truck crane operator practical exam in Houston in 2013.Photo: NCCCO

“I spoke to the directorate last week  [early October] and they are still confident they can get this final rule out before then,” Graham Brent said in a phone interview in mid October.

“I’ll only say they’ve been pretty confident before and they haven’t managed to meet the deadline,” Brent added.

In fact, the day before the previous deadline of Nov. 10, 2017, OSHA published a notice on the Federal Register that confirmed a long-anticipated extension.

The operator certification requirement was included in an update to OSHA standard for cranes and derricks in construction — called 29 CFR Part 1926 — published in 2010. Most of the provisions went into effect soon after, Brent said.

The proposed rule excludes cranes of 2,000 pounds capacity or less. “This standard applies to power-operated equipment, when used in construction, that can hoist, lower and horizontally move a suspended load,” the proposed regulations say. They specifically include “service/mechanic trucks with a hoisting device” but also exclude a “mechanic’s truck with a hoisting device when used in activities related to equipment maintenance and repair.”

Since service trucks are used primarily for repairing and maintaining equipment, the certification requirement usually doesn’t apply. However, Brent outlined a scenario where a service truck operator goes to a jobsite expecting to work on an engine and someone else on the site notices the crane and asks the operator to lift some pipe.

“Of course the guy is going to do that,” Brent said. “And that’s construction. So as an employer you want to be completely covered 100 percent of the time. And the way to do that is to have them certified.”

Another grey area is that service truck cranes are also used to hoist propane tanks. The wrinkle is that when a crane merely swaps an empty tank with a full one, that’s considered maintenance. But when a crane installs a propane tank for the first time, that’s regarded as construction.

Propane group seeks exemption
The National Propane Gas Association has called for OSHA to exempt truck-mounted crane delivering propane tanks from the regulations and asked for it to delay the Nov. 10, 2018 deadline. “This certification will cost the industry an estimated $151 million every five years,” said a posting on the association website.

The association even threatened to press the case to President Trump. “With the compliance deadline coming up in November, let’s tell The White House how much this rule impacts our industry so they will intervene with OSHA on our industry’s behalf.”

The NCCCO, in a July 5, 2018 letter to Loren Sweatt, the deputy assistant secretary of labor at OSHA, said it would “reluctantly support” another six month extension to the rule-making process. “We said, frankly, no because it’s taken us so long to get here that we think six months is probably not going to make a whole of difference,” Brent said.

“So if you’re a crane operator it’s in your own interest frankly to get certified,” Brent said.
The new rule will cover states and territories lacking crane certification requirements and create a “federal floor” that state regulations must meet at a minimum.

Since the last deadline extension on the regulations, OSHA has proposed removing a provision that required different levels of certification based on lifting capacity, although testing agencies can still do so. That’s a move the NCCCO supports.

OSHA also considered but declined to include an exemption for operators of cranes in the 5,000 to 35,000 pound capacity range. The NCCCO supports that move as well.

“What they said was the same risks are present regardless of the capacity,” Brent said, although he was at a loss to explain why that proposal didn’t also cover cranes from 2,000 to 5,000 pounds capacity.

One area where the NCCCO disagrees with OSHA is a proposal that trainers not be required to be certified operators.

In its response, the NCCCO said that “while certification may not be an appropriate ‘sole’ crit
erion or a sufficient indication of competence as a trainer, it should be regarded as an appropriately necessary condition of establishing such competence and ensuring a ‘baseline’ of knowledge and skills.”

Numbers hard to estimate
Brent said the NCCCO has currently certified about 100,000 crane operators, which he “conservatively” estimated is 80 percent of all the certified operators. But how many others are still to be certified, “frankly, nobody knows,” he said.

“We won’t really know before the whole thing shakes out,” he added. “It’s obviously more than 100,000. Is it 200,000? Probably not actually. We’ve been doing this for 23 years and we’ve been talking about it now as a federal rule for at least 15. We’ve had deadlines come and go but these deadlines have had the effect of focusing people’s attention and getting trained and certified. So we’ve had spurts along the way. I’ve got to think, though, we’re it’s only half way there.”

The rules themselves might even lead to companies having fewer crane operators because firms might decide to reduce the cost of certification and only assign specific people to operate the cranes and assign others who formerly did some crane operating to other duties. Indeed, he cited the example of an unnamed petrochemical company that he recalled doing just that.

“That’s why it’s completely impossible to estimate because as soon as you can get an accurate number right this minute, they will change or probably reduce as a result of the mandatory requirement coming in,” Brent said.
— Keith Norbury

by Keith Norbury
Posted by Lehmers Work Trucks at 8:30 AM