Brand’s first quarter was best in 10 years,
and momentum continues 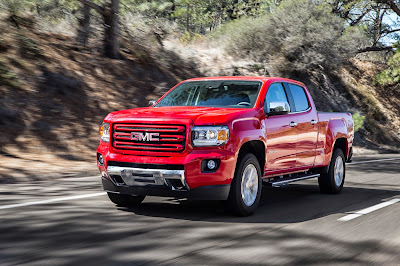 DETROIT – When it comes to midsize trucks, Mike Taylor of Dallas has switched from regular to premium.

The 35-year-old IT engineer and consultant recently swapped his barely broken-in 2014 Toyota Tacoma for a 2015 GMC Canyon Crew Cab in Onyx Black.

“The Canyon just offers so much more,” Taylor said while loading firewood into his truck bed recently. A military retiree and father of three, Taylor is especially fond of premium Canyon features such as the CornerStep rear bumper, large cargo bed, OnStar 4G LTE connectivity and crash-avoidance technologies.

“It’s as if GMC listened to its customers, addressed any concerns and then provided solutions,” said Taylor, who used the GM Military Discount to purchase his Canyon. Through June 30, all 22 million U.S. military active-duty, retirees, reserves and veterans are eligible for special military pricing; after June 30, the discount still applies, but covers veterans within a year of separation.

Taylor helped drive GMC’s total first-quarter sales up 15 percent compared with a year ago – for its best January-March since 2005. April retail and total sales were up 8.1 percent and 20 percent, respectively, marking 15 consecutive months of year-over-year sales gains for the brand.

Through April 30, GMC delivered 167,005 vehicles in the U.S., up 16 percent year over year. Overall, nearly 17 percent of GMC sales have been to import vehicle owners. For Canyon, the import conquest rate is nearly 24 percent as GMC continues to inject premium amenities into what used to be a bare-bones segment.

Separately, the Sierra full-size pickup saw its best April since 2004; Acadia and Terrain posted their best April sales ever; and it was the highest-performing month all year for Yukon and Yukon XL.

“Our robust average transaction prices, relatively low incentive spend as a percentage of average transaction prices and the popularity of our top-of-the-line Denali trim level continue to demonstrate GMC’s appeal to discerning buyers,” said Aldred. “And for those who have not yet experienced all that GMC has to offer, our ‘Precision’ advertising campaign is raising awareness and increasing traffic in our dealerships.”

GMC’s Denali line represents about 23 percent of all GMC sales but is nearly 60 percent of Yukon and Yukon XL full-size SUV sales and 44 percent of Sierra HD sales.

Surveys of GMC customers reveal their top reasons for purchase include exterior styling, quality, seating capability, towing capability, family-friendliness, value for the money and a previous positive experience with a GMC vehicle.

“The Canyon styling caught my eye,” said Taylor, who owned a 2009 Tacoma before he bought the 2014 model. “The difference (between Canyon and Tacoma) is like night and day – I couldn’t even get leather seats in the Tacoma. I thought I’d live and die with them, but the Canyon changed that.”

The Canyon development team spent months talking to midsize truck customers to determine how they used their trucks and what features they wanted in a new one. Customer feedback helped inform popular Canyon features such as the segment’s largest cargo bed, connectivity and infotainment, the available GearOn cargo management system and available EZ-Lift and Lower tailgate.

The GMC brand and its models have received numerous accolades. For the second year in a row, and on the strength of Denali, GMC won Kelley Blue Book’s Brand Image Award for Most Refined Brand, with high ratings for comfort, interior layout, technology and prestige/sophistication.

Terrain, Yukon and Sierra 1500 lead their segments in the 2015 J.D. Power Vehicle Dependability Study. Canyon won AutoWeek’s 2015 Best of the Best Truck award and was named one of Ward’s 10 Best Interiors.

Editors evaluated the Canyon SLT model and praised the truck’s soft surfaces, thoughtful layout, and premium details such as contrast stitching, Bose audio system, easily navigated touchscreen and advanced safety features. They wrote that Canyon “feels more like a well-equipped SUV, but with a bed in the back.”

Forbes named Yukon and Canyon to its list of Hottest New Cars and Trucks for 2015. Acadia made Edmunds.com’s list of the most popular 2015 models.

About GMC
GMC has manufactured trucks since 1902, with innovation and engineering excellence built into all GMC vehicles. The brand is evolving to offer more fuel-efficient trucks and crossovers, including the Terrain small SUV and Acadia crossover. GMC’s highest-volume vehicle, the Sierra pickup, is the most powerful light-duty pickup on the market, and the first full-size pickup to receive the highest-possible five-star Overall Vehicle Score for safety since the National Highway Traffic Safety Administration changed its New Car Assessment Program for the 2011 model year. Details on all GMC models are available at http://www.gmc.com/, on Twitter at @thisisgmc or at http://www.facebook.com/gmc.


Posted by Lehmers Work Trucks at 8:30 AM