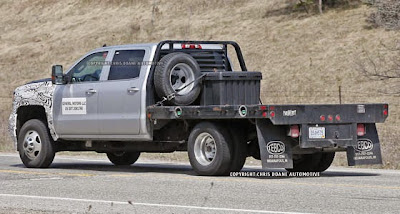 The GM light-duty and heavy-duty pickup trucks look like they'll be coming to market refreshed for 2017 or 2018. Our spy shooters are seeing both of them running all sorts of loaded and empty test loops, likely to work out the bugs on a modified or upgraded powertrain. Here's their latest report:

"Recently we've caught the updated Chevrolet Silverado and GMC Sierra light-duty pickups out on their first test runs. … We caught a pair of 2016 GMC Sierra Heavy Duty prototypes (one crew-cab 2500 near maximum payload and towing capacity, and the other an empty chassis-cab Duramax) coming in from a run.

"Much like the light-duty trucks we've seen before, the Sierra looks to be hiding a moderate front-end refresh, with a new front end, hood cuts, a revised grille and updated headlights.

"We suspect the bigger news is under the hood, where the GM HD trucks are reported to get upgraded versions of the Duramax V-8 turbo-diesel. At least one report pegs the new Duramax numbers at 450 horsepower and 850 pounds-feet of torque.

"A version of the 10-speed transmission co-developed with Ford is also likely to make it into the heavy-duty pickups by 2018."