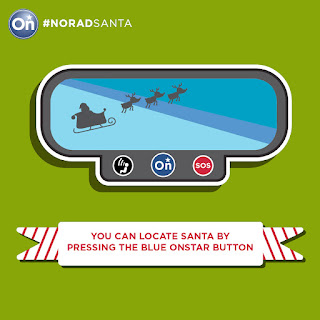 DETROIT – OnStar subscribers can get in the Christmas spirit during holiday travel across the U.S., Canada and Mexico by pushing their blue button to learn Santa Claus’ whereabouts between Christmas Eve and Christmas morning.

With support from the North American Aerospace Defense Command (NORAD) and its 60 years of Santa-tracking experience, OnStar for the seventh consecutive year will reveal Santa’s location to the curious between 6 a.m. EST Dec. 24 and 5 a.m. EST on Dec. 25.

Additionally, OnStar and its AtYourService partner Audiobooks will offer subscribers complimentary copies of the Christmas classic “The Night before Christmas,” downloadable via an email link sent by an OnStar advisor. Everyone in the vehicle can listen to the book on the Audiobooks mobile app together using Apple CarPlay, Android Auto or a Bluetooth connection, or individually on any of the up to seven mobile devices that can be connected separately to the OnStar 4G LTE Wi-Fi hotspot.

OnStar will also donate a dollar to United Way for Southeast Michigan and the United Way Mexico for each Santa location call received. Last year, the calls led to a donation of more than $2,600 to the two organizations.

“The holiday season is all about spreading cheer, giving back to the community and connecting with others,” said Terry Inch, OnStar chief operating officer. “OnStar has become a key enabler for that. Our advisors really enjoy playing the role of Santa’s helper and sharing the joy of Christmas with our subscribers.”

OnStar is dedicated to the safety and security of subscribers throughout the year. To support incoming Santa Update requests, advisor staffing is adjusted to accommodate the extra traffic. On average, OnStar receives more than two calls per minute and more than 185,000 calls each day.