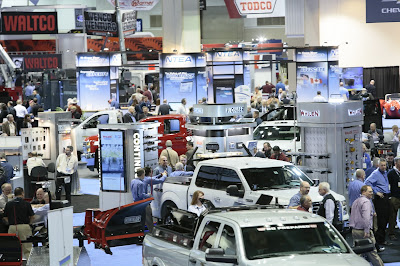 This breaks the event’s previous attendance record of 11,005, set in 2015. Attendees came from all 50 states, eight Canadian provinces and 19 countries.

The Work Truck Show 2016 was held March 1 to 4 at the Indiana Convention Center in Indianapolis, Indiana. It is produced annually by NTEA, The Association for the Work Truck Industry.

“It was a great week,” says Steve Carey, NTEA executive director. “The Work Truck Show is the one event where everyone involved with vocational vehicles in North America comes together to share ideas, see what’s new and find opportunities for their business operations.”

Isuzu Commercial Truck of America Inc. used the Show to unveil its 2018 FTR Class 6 medium-duty truck to a huge crowd. Mitsubishi Fuso Truck of America Inc. debuted its prototype Fuso E-Cell all-electric truck and gave attendees the first opportunity to drive it in North America as part of The Work Truck Show Ride-and-Drive March 2 to 3.

There were significant powertrain announcements made as well. Cummins Inc. introduced its 2017 B6.7 and L9 medium-duty engines, and Daimler Trucks North America gave the public its first glimpse of the new Detroit DD5 medium-duty engine.

During his keynote address at the Green Truck Summit general sessions on March 1, Reuben Sarkar, deputy assistant secretary for transportation at the U.S. Department of Energy, announced SuperTruck II, an $80 million funding opportunity for research, development and demonstration of long-haul trailer truck technology. He also announced more than $12 million in selections for three new projects focused on plug-in electric powertrain technologies for medium- and heavy-duty vehicles. In other “green” news, Work Truck Show exhibitors highlighted significant propane fleet adoptions and even converted a pickup truck to run on propane right on the Show floor.

The Work Truck Show 2016 was the largest event in NTEA history. Over the last five years, NTEA expanded the exhibit floor by more than 40 percent, but still had a sizable waiting list of potential exhibitors. In response to this demand, NTEA has maxed out all available room at the Indiana Convention Center for The Work Truck Show 2017 and exhibit space has already sold out.