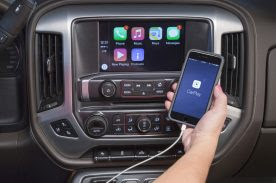 DETROIT – GMC adds Apple CarPlay capability to the 2016 Canyon, Yukon and Sierra, taking the iPhone features customers want to access while driving and putting them on the vehicle’s display in a smart, simple manner with the brand’s IntelliLink system.

Android Auto capability will also be offered on some Sierra models at the beginning of the model year and all Sierra, Canyon and Yukon models later in the year.

The features allow customers to use select smartphone apps through the touchscreen interface of GMC’s IntelliLink system. Many features can be controlled via voice commands through a button on the steering wheel, helping drivers keep their eyes on the road and hands on the wheel.

“GMC IntelliLink is taking another step forward with this simple and intuitive functionality that makes phones and vehicles work better together,” said Duncan Aldred, vice president of GMC Sales and Marketing. “Like other GMC features, from OnStar 4G LTE connectivity and active safety features, it’s technology designed to enhance the driving experience without intruding on it.”

GMC’s latest infotainment systems include an eight-inch-diagonal screen version offered on Canyon, Yukon and Sierra, which will be compatible only with Apple CarPlay at the beginning of the 2016 model year. A seven-inch-diagonal screen radio is offered on Sierra base models and will offer Apple CarPlay and Android Auto capability at the beginning of the model year. Android Auto capability is expected to be available on the eight-inch system later in the 2016 model year.

Apple CarPlay takes the iPhone features customers want to access while driving and puts them on the vehicle’s display in a smart, simple manner. This allows drivers to make calls, send and receive messages and listen to music right from the touchscreen or by voice via Siri. Apple CarPlay-supported apps include Phone, Messages, Maps, Music and third-party audio apps. A full list of those apps can be found at Apple.com/ios/carplay. Apple CarPlay is compatible with iOS 7.1 or higher.
Android Auto is built around Google Maps, Google Now and the ability to talk to Google, as well as a growing audio and messaging app ecosystem that includes WhatsApp, Skype, Google Play Music, Spotify and podcast players. A full list of supported apps is available at g.co/androidauto. Android Auto requires a phone running an Android Lollipop 5.0 operating system or above.
Using either application is simple. A “Projection” icon on the IntelliLink screen is visible when a phone is not connected, then changes to indicate CarPlay or Android Auto when a compatible phone is connected via USB.

Compatible apps need to be downloaded to a phone before using. Apple and Google’s privacy statements and terms of use apply. Data plan rates may also apply.

The state-of-the-art technology provides a mobile hub for drivers and passengers to stay connected wherever and whenever they like with up to seven personal devices. The hotspot is on whenever the vehicle is on and comes with a three-month/three gigabyte data trial, after which there is an option to purchase additional data.