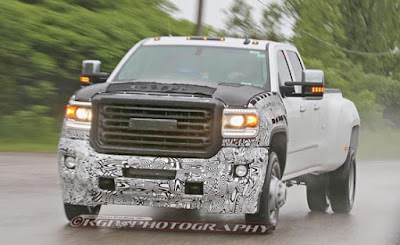 GM pickup truck engineers have been relatively quiet lately while both Ford and Ram Truck make news with new HD products, which includes exotic materials and increased capability. But it looks like that's about to change, given the size of this parade. Our spies have seen several three-quarter-ton and one-ton Chevrolet and GMC pickups doing quite a bit of tow testing and loaded laps around Michigan. That means GM is likely getting close to showing its new trucks to the media, and we can't wait. There's been lots of speculation about new power train ratings, but so far it is only that. Here's what we recently heard from our photographers.

"We caught a convoy of heavy-duty Chevrolet Silverado and GMC Sierra prototypes on the open roads, giving us our best look yet at the rugged remakes of the crew-cab versions of the single-rear and dual-rear-wheel trucks due out sometime in 2016. The goal must certainly be to bump the current 6.6-liter Duramax turbo-diesel's horsepower, torque and towing capacity to counter Ford's recently upgraded 6.7-liter Power Stroke V-8 turbo-diesel. Ford's revamped 6.7-liter Power Stroke currently outguns GM's 6.6-liter unit, generating 440 horsepower and 860 pounds-feet of torque (GM is making 397 horsepower and 765 pounds-feet of torque).

"We can clearly see that part of GM's strategy is to feed more air into the engine via a new functional hood air intake designed into the pickups' redesigned hoods. The new air duct sits prominently near the leading edge of the hood. The GMC gets a circular mesh intake grille, while the Chevy appears to get a diamond-shaped interweaving mesh grille insert. The Silverado and Sierra pickups had uncovered grilles and lightly camouflaged front bumpers, with a heavier vinyl hood hiding the hood's new air intake. We're guessing the new breathing apparatus has been added in conjunction with a revamped diesel engine, reportedly using a modified turbo and new engine management software resulting in a significant power boost.

"Likewise, Ford is now nearly at completion of a significant aluminum-intensive overhaul of its Super Duty pickups, so GM had better hope that its changes are substantial enough to keep its pickups competitive."